When COVID-19 travel restrictions prevented Romeo Cox from visiting his grandmother, the 10-year-old boy decided to walk instead. Romeo took the 2,800km journey from Italy to London just to give his grandma a hug. He even turned the mission into his very own initiative in kindness, raising awareness and funds for refugees along the way.

For such a young boy, Romeo was determined to get some facetime with his beloved grandmother. However, COVID-19 was making his dreams a bit more difficult than usual. Refusing to take no for an answer, he came up with a plan to show up for his granny during these tough times anyway.

In an interview with the BBC, Romeo explained, “In quarantine, I came up with this idea to visit my granny, but in secret by not using cars, planes.” Since flying wasn’t an option, he decided that he would travel by foot, bike, and boat, and even got his father on board to walk with him and document the journey! 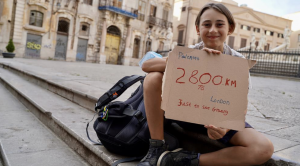 Romeo left his hometown of Palermo, Italy with his father in late June and arrived at Trafalgar Square in London on September 20th. The duo started their trip by sailboat, after which they would cycle for a bit and then trek on foot for the remainder of their travels. During this stretch, the two had to wake up as early as 4:30 am to complete their average of 20km per day. Nights were spent camping and in hostels. Cox commented to the BBC on the experience, stating “We would sleep in the middle of nowhere under the stars and trees and those were some really good times.”

Social media documentation began as a way to share the highlights of their trip. However, Romeo and his father would soon be inspired to add another layer of kindness to their story which would become the centerpiece of their mission.

After several first-hand experiences crossing paths with refugees, the duo decided to use their journey as a platform to raise awareness around the challenges that these individuals face on a daily basis.

Romeo shared a bit on the subject during the BBC’s interview, stating “I was passing the cliffs trying to get to our hostel in Calais and we met this Sudanese boy trying to cross from Calais to his family and brother in the UK and he wasn’t allowed. I felt it was unfair for me to meet my family and him not to.”

This encounter and many others like it sparked Romeo and his father’s plan to begin a fundraiser, benefitting the charity Refugee Education Across Conflicts Trust (REACT). The money they have raised will be going towards a new community center in Palermo for refugees, as well as towards supporting equal education opportunities for kids in need.

On the fundraiser’s page, Romeo states, “If you support me, this money will also go to buy 50 tablets and wifi connection for refugee and local disadvantaged kids to use and share. I know that some kids my age and older here in Palermo have missed out on all the study during lock-down because they cannot get online for the lessons and already find themselves excluded and missing out. Being able to learn online and have digital learning is important!”

In his final statements on the duo’s fundraising page, Romeo wrote, “We should help each other. Always.” We couldn’t agree more. During the good, the bad, and everything in between, a little kindness and compassion goes a long way.

NEXT5 Fun Ways to Keep Halloween Kind During COVID-19